Now this one was a challenge.

To look at this photograph you would not think it would rate as one of the most challenging images I have ever had to restore. It doesn’t have large sections missing and it isn’t so faded it it barely visible.  It is however covered in tiny spots and stains.  In fact, when I fist saw it and even when I scanned it I thought it would only take a few hours to restore. It did take a few hours, then a few hours more and then a few hours more.  In hindsight, I would have been best to rephotograph this image rather than scanning. 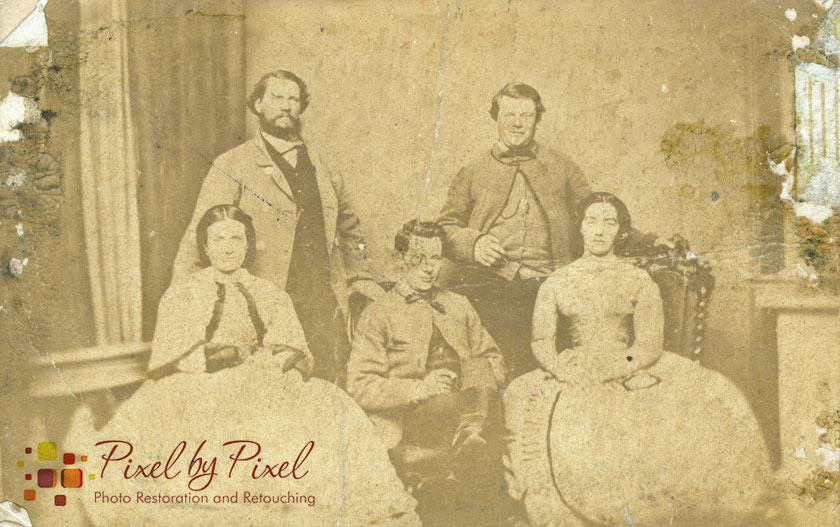 I am often able to repair damage by manipulating channels and creating elaborate masks and whilst my methods did prove successful in some areas of this image it wasn’t enough. I found dodge and burn on a 50% grey layer to be the most effective method for removing many of the dark spots and stains.  The results obtained from this method are much better than those I was able to achieve with cloning and healing…they also however took much longer than a quick clone and heal.  I am not complaining though. I acquired a few new skills during this restoration (by reading and watching tutorials from other Photoshop technicians) and I am quite happy with the end result. I know it could be better given more time. This I could say about most every image I restore but there comes a time (usually after spending at least twice as long as you first planned) when you simply need to sit back and ask if all the defects you see in a photo will be visible to everyone else, especially when printed as a small print. I completed the restoration and sent it off for printing and just as I suspected, those hundreds of tiny spots that were bugging me on my 24″ screen were barely visible in the 6″ x 4″ print. 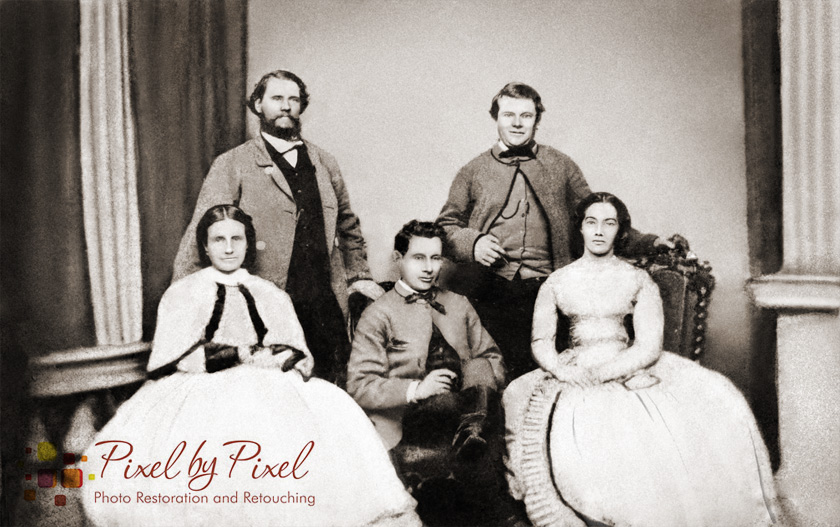 You will notice that the woman on our right has her eyes closed in the original but open in the restored version. This was my artistic interpretation. There were two versions of the image produced; One with eyes open and one with eyes closed. I wouldn’t advise such changes with all images. Sometimes ‘subjective’ alterations to an historical image can compromise it’s integrity. In this case I don’t feel that it did.  She just happened to blink during the exposure.   The eyes used were ‘borrowed’ from her sibling and slightly altered. Thanks to Jenny for allowing me to share her image of Charles Phibbs and family.  Those faces which were fading away will now be visible for many years to come.