Home/Photo Restoration/All Kinds of Crazy; restoration of a very odd image
Previous Next

All Kinds of Crazy; restoration of a very odd image

I found this image at the Camberwell Sunday Markets and decided it would be a fun restoration challenge.  I like sifting through these old images to find something quirky and on this occassion, I certainly found it!

It wasn’t until I scanned the photograpah and took a closer look that I realised just how strange it was.   All kinds of crazy! 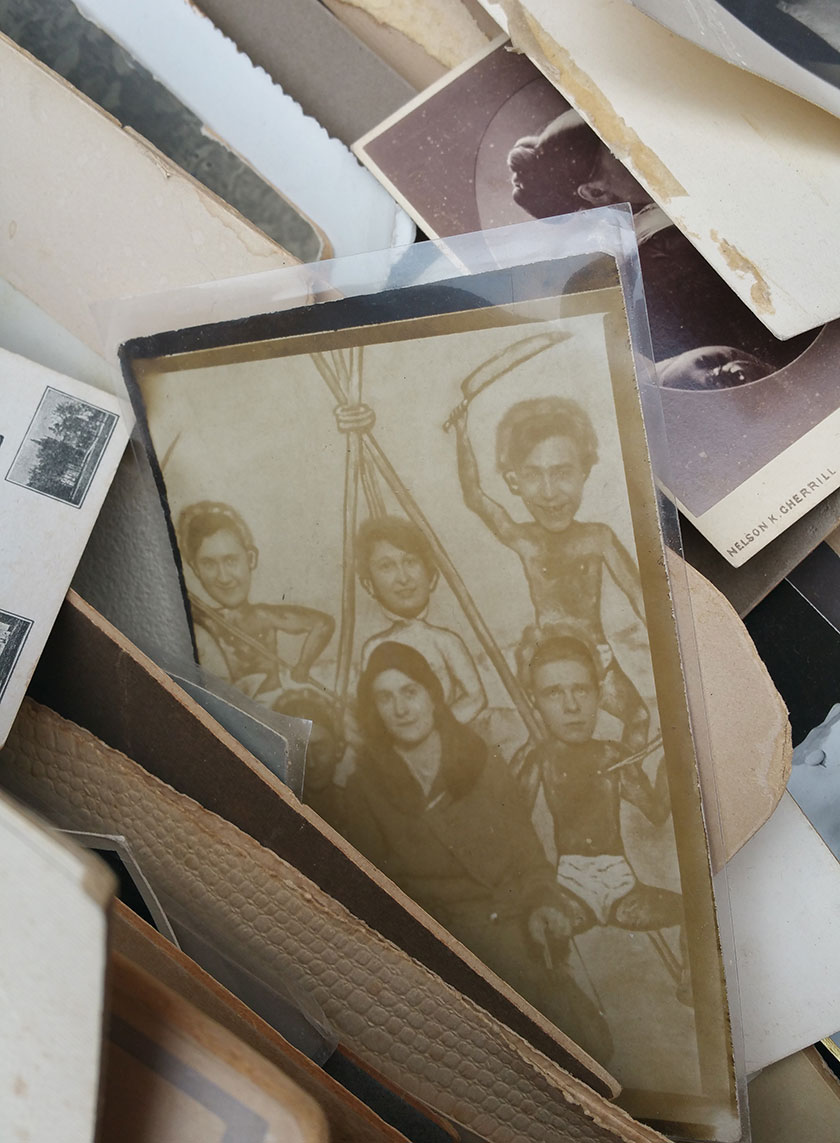 At first glance it looks like a photo cut-out scene with nappy clad babies wearing bonnets and waving knives and spears.   On closer inspection the cut-out scene seems to depict a tribal scene  (culture unknown), naively painted with men wearing loin cloths and a head-piece, holding knives and spears dancing around a woman who appears to be in colonial dress, possibly tied to a stake.  It is obviously a photo taken at a tourist attraction or fair. 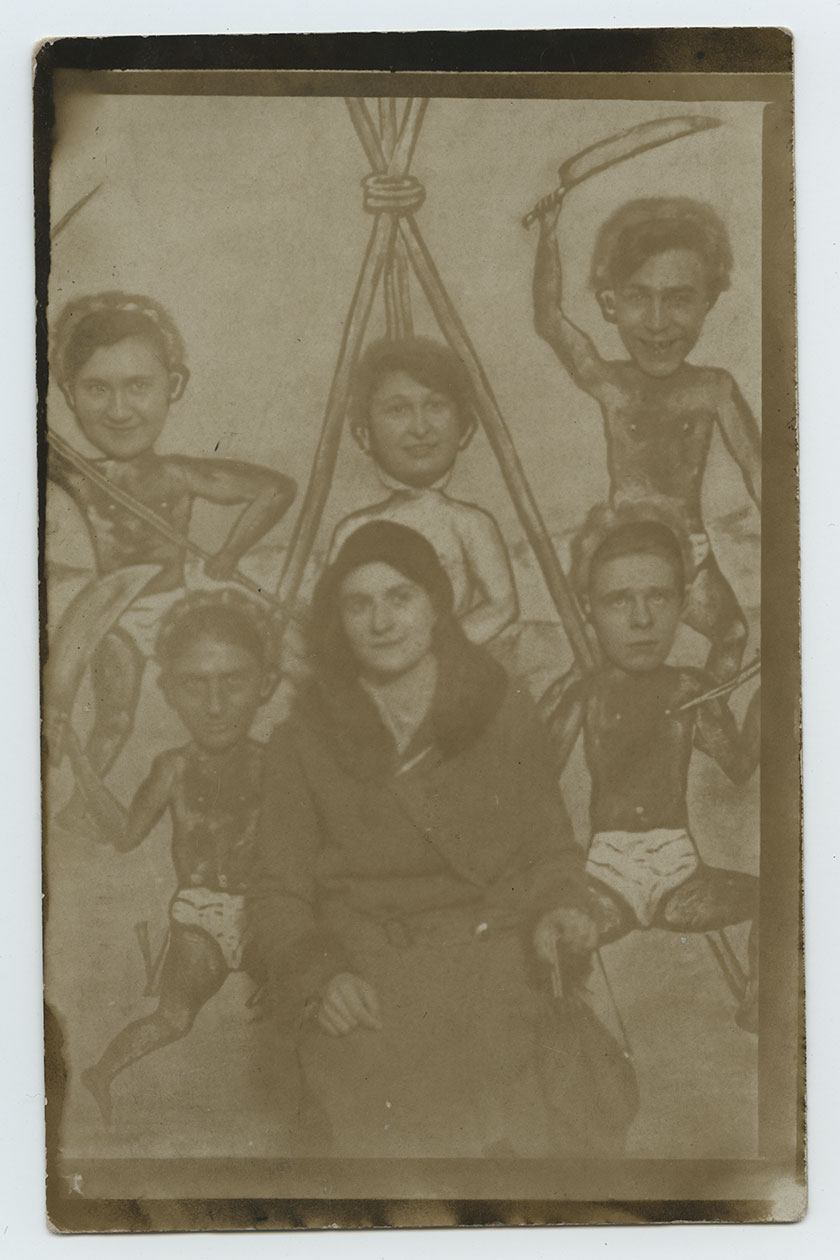 My guess is that the smiling faces protruding from each hole are all family members.  Most probably father and children.  A woman sits in fine dress in front of the structure, a stark juxtoposition to the themed image, obscuring parts of the photo cut-out. To say the least, it is very, very odd.  Certainly not your average family photo.

My restoration process began by cropping the border from the image.  I then corrected the exposure of the image and converted it to black and white.  Quite often, when faded images are enhanced, spots and scratches become very prominent.  That was the case with this image.  There were also many areas of uneven exposure making the image look ‘blotchy. 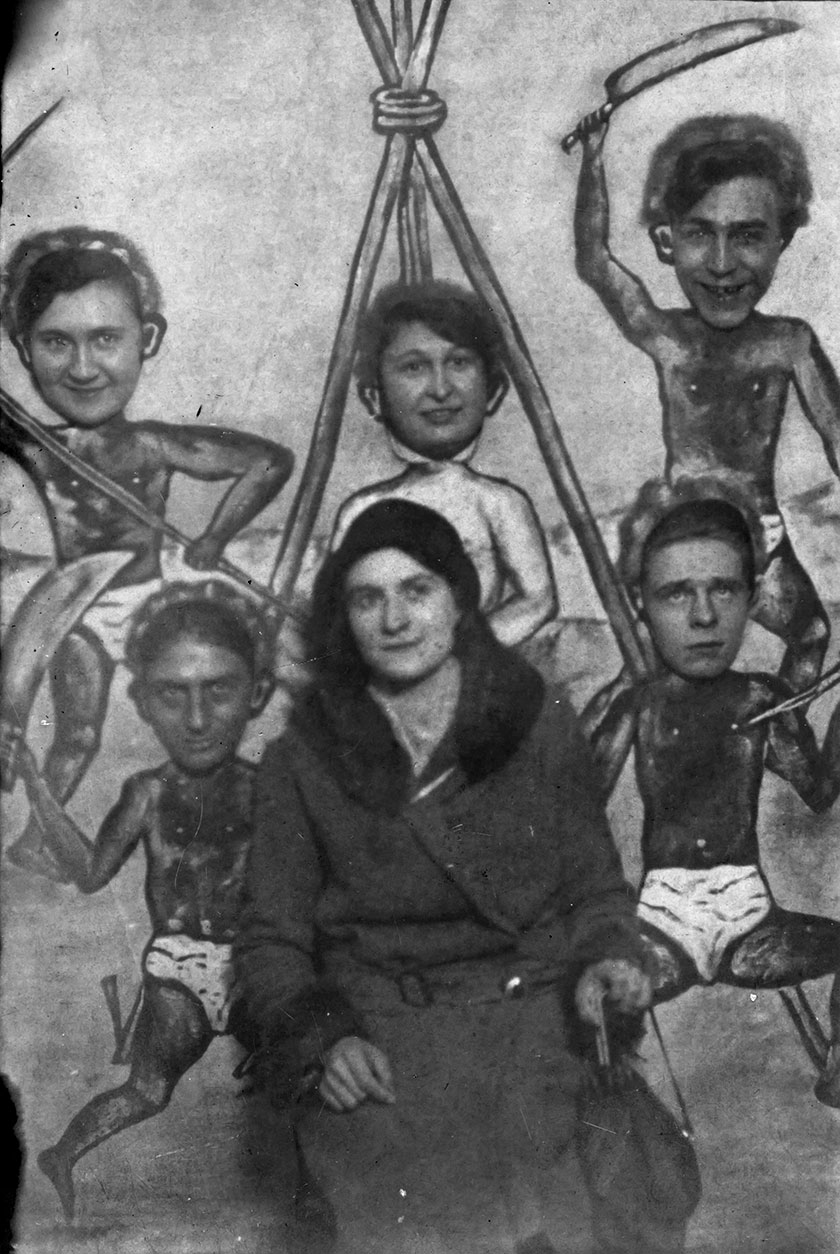 After initial exposure correction and black and white conversion.

I spent some time burning and dodging the image to even out those exposure variations.  This gave me a much cleaner ‘canvas’ to perform spot and scratch removal.  I always perform my dodge and burn on a 50% grey layer, allowing me to easily correct any ‘mistakes’ I might make.  These layers look as strange as the subject matter of this photograph. 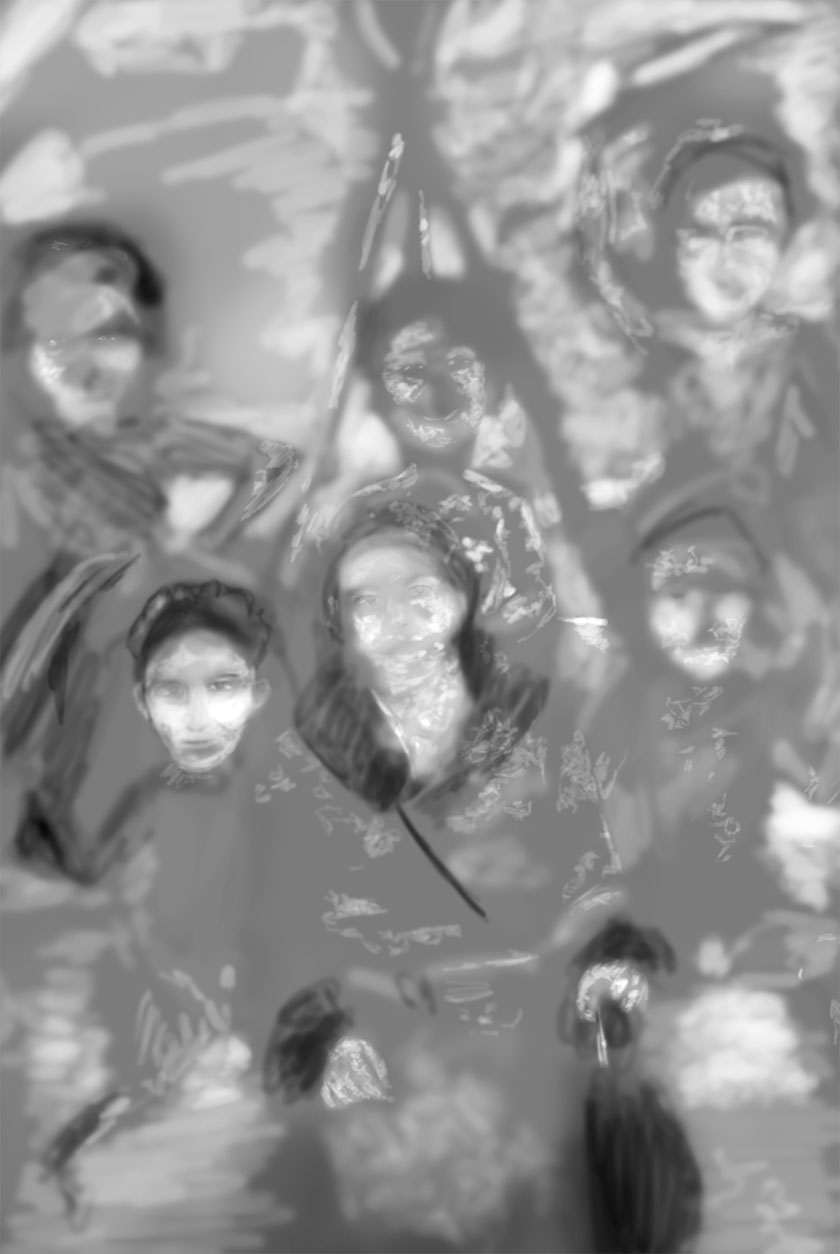 Next came the spot and scratch removal.  I also added a very subtle sepia tone to the image.  The more I worked on this photograph, the stranger the subject matter seemed.  Who are these people and where was this photo taken? 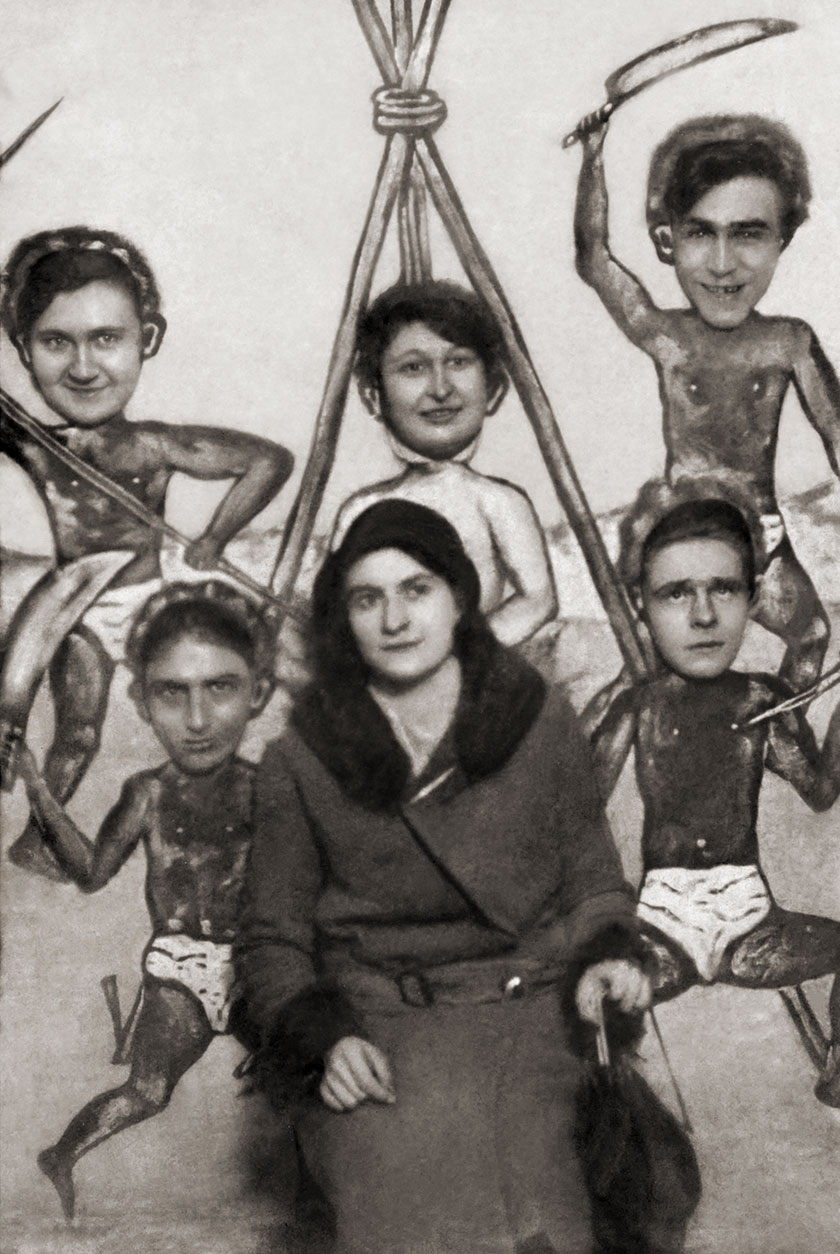 I decided to add colour to the image.  Nothing too exciting.  Just something to add to the kitsch quality of the photo. 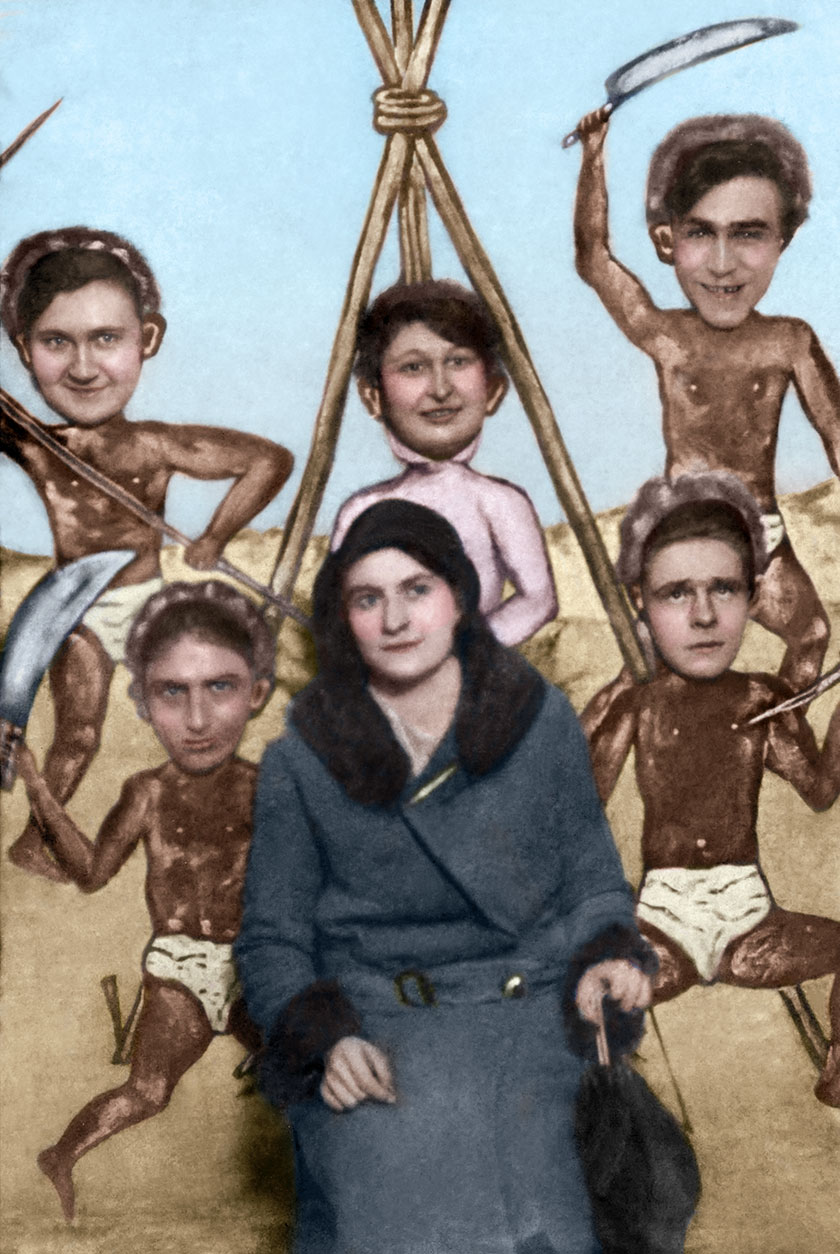 I come across some odd and interesting photos with my restoration work.  This is perhaps one of the strangest I have ever worked with, in so many ways.

So, who do you think these people were and where do you think this photo was taken.  If anyone has come across this same photo cut-out in their own family images, I would love to learn more about it.